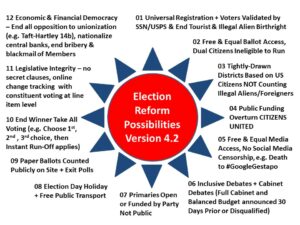 “There is nothing wrong with America the Beautiful that cannot be fixed, and fixed quick, by restoring integrity to how we self-govern. Election fraud is the foundation of the Deep State; Election reform is how We the People take the power back to make America great again.”

Join Robert David Steele in the state-by-state fight to #UNRIG US elections.

Steele, former Marine Corps infantry officer and CIA spy, is the lone analyst who has studied and integrated all election reform proposals into a single, unified action plan.

Previous election reform proposals have consisted of fragmented, isolated elements that will not work without a larger, more coherent approach – one that closes all the trap doors that the 1% use to create a Congress chock full of traitors.

Steele — who manages ten websites and is currently making five movies in production, all while serving as the sole financial and legal authority for ARISE USA: The Resurrection Tour – is pounding the pavement on the way to a city near you to spread the word.

Most Popular All Time

Subscribe FREE to This Blog
Opt In for Daily Digest

Donate – Get Emails From RDS

Trent Loos – Ride for the USA!